Before delving into the technical details of standard deviations. It is important to consider why projectile velocity is important for long range shooting. The firing pin strikes the primer igniting the propellant charge which accelerates the projectile through the length of the barrel. When the bullet exits the barrel it is at its maximum velocity. The velocity of the projectile as it exits the barrel is referred to as the initial velocity; commonly denoted as Vo. The initial velocity (Vo) of a projectile as it exits the muzzle of the firearm is critical variable in kinematic equations of motion as it has a significant effect on the trajectory of the bullet with respect time of flight to target, drop, drift and kinetic energy.

As the bullet exits the barrel, forces such as air resistance, wind vectors (direction) and gravity begin to influence the trajectory of the bullet. Air resistance is a force acting in the direction opposite to relative motion of the bullet and acts to slow the velocity of the bullet. Atmospheric conditions such as density influence the amount of air resistance acting on a projectile. The geometry or shape of the bullet will also have an effect on the amount of air resistance encountered. The more dense the air the more resistance will be encountered by the bullet. Additionally, air resistance is a function of velocity and in laminar flow conditions the air resistance force is proportional to the velocity. Said differently, at higher velocities, there is more air resistance acting on the bullet and this force decreases as velocity decreases. With regards to wind vectors, atmospherics as well as the cross-sectional area and time of flight will influence the drift of the bullet. A larger cross sectional area results in more surface area for wind forces to act on and thus will impart more force on the projectile. It is noteworthy that cross-sectional area is a component in calculating ballistic coefficients. The time of flight is also important because the longer the bullet is in motion the more time wind forces are pushing the bullet; thus increasing drift. As a result, higher initial velocities will reduce time of flight and thus drift. Similarly, gravity also begins to act on a bullet as it leaves the barrel. Gravity is a constant force acting on the bullet while in flight. Shorter flight times mean gravity is acting on the bullet for less time and thus results in less drop. It is apparent that these forces, while not an exhaustive list of forces and factors influencing bullet flight, are highly interrelated.

Considering the forces discussed in the previous paragraph, consider how a change to the initial velocity will influence the bullet trajectory or flight path. For example, a bullet exiting the barrel faster (assuming identical geometric properties of each bullet and identical atmospheric conditions) will reach the target sooner with less drop and drift because gravity and wind vectors will act on it for shorter periods of time. If there are large variations in the initial velocity of the bullet, the trajectory will also vary. The variation in trajectory becomes more and more evident as distance increases and external forces have more time to act on the bullet. As a result, knowing and maintaining consistent initial muzzle velocity Vo is necessary for predictable, consistent and repeatable trajectories at long range.

As the variation in initial muzzle velocity increases hit probably goes down. This is because the ability to accurately apriori predict trajectory for windage and elevation adjustments becomes more difficult. It is important to note that other factors beyond just the initial velocity influence hit probability at long ranges. Some of these factors include the general precision (grouping) of a cartridge in a given rifle, bullet twist to stabilize the projectile.

Variation in a large number of factors including but not limited to propellant charge, primers, case geometry and neck tension can lead to variation or changes in initial muzzle velocity. Unfortunately, a cartridge has to be fired to determine the projectile velocity. A measure is needed to estimate how much variation can be expected from round to round when shooting.

Bessel’s correction is commonly used in most ballistic calculators and statistical software packages for calculating sample standard deviations. For interpretative context, it should be noted that Bessel’s correction increases the mean squared error. Also, Bessel’s correction provides an unbiased estimate of the variance but not of the standard deviation. This is because the square root is a concave function and the concave transformation of a mean results in a value that is greater than or equal to the mean formed after such transformation. Although unbiases estimators of the standard deviation have been proposed and research has shown n-1.5 to produce asymptotically more accurate estimates, in general practice, especially considering the sample sizes often used in precision shooting, the difference between Bessel's and other corrections accounts for a relatively small proportion of the error.

Alternatively, one can also consider the formulations with respect to a probability density function where the variance can be expressed as:

To understand a standard deviation, it is next important to understand what the number means and how it is interpreted. The central limit theorem states that if a series of samples is taken from a population, the distribution of the sample means will approach a normal distribution as n approaches infinity. This is a critical statistical and probability concept because it implies that a normal distribution can be used as an approximation for a range of problems; even when the underlying distribution itself is not necessarily normal.

A normal or Gaussian distribution has many desirable properties. The normal curve is sometimes referred to as the bell curve because of its shape. When standard deviations are calculated for muzzle velocity, the assumption is that muzzle velocity will approximate a normal distribution. 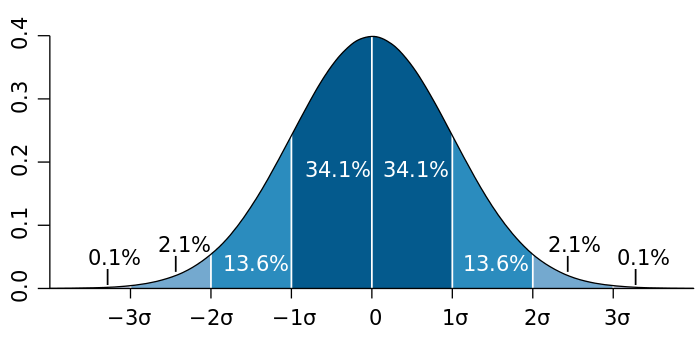 To recap, a standard deviation is a measure of variation around a mean or average. The figure above illustrates a normal distribution. Numbers closer to the mean are more likely to occur than those further away from the mean. By taking a sample, in the case of precision shooting, chronographing several shots, we can calculate a standard deviation and make some inferences about how likely a given value (velocity) is to occur.

Additionally, consider the issue of sampling error. If a sample of 5 shots is taken where the true population standard deviation is 10 ft/second, while it is most likely that a majority of the velocities recorded will be within 20 fps or +/- 1sd, it is possible by chance alone to obtain a velocity value 2-3 standard deviations away. Obtaining a velocity range of 50 ft/second range or extreme spread due to one ‘outlier’ in a small sample will artificially inflate the calculation of the standard deviation. Simply seeing one somewhat aberrant velocity reading in a small sample should be evaluated in the context of what rare events should be expected for a given standard deviation. If the result appears consistently over time, it may be indicative of a larger standard deviation and expected velocity spread. Nonetheless, it is important not to unduly focus on n=1 events with small sample sizes. From the central limits theorem, typically a sample begins to approach a normal distribution with an n (sample size) of approximately 27.

An assumption underlying standard deviation calculations is that observations are independent of one another or that one measurement does not have any effect on the others. In the case of precision shooting, this is not necessarily the case. One example is barrel and receiver temperature. As rounds are fired through the barrel it heats up; sometimes quite dramatically after large shot strings. Temperature of the barrel and receiver will have effects in two ways. First, from the Ideal Gas Law Pressure * Volume = n amount of a substance * R ideal gas constant * Temperature we can see that the heating of the case and thus perhaps the propellant can cause a change in velocity. This is especially true if the ammunition is loaded with double base propellants which include nitroglycerin in the mixture. At Eagle Eye, to keep our propellants as thermally stable as possible, we only utilize single base extruded propellants without nitroglycerin. Another way temperature can cause velocity measures to be correlated is via thermal expansion of the barrel. As the barrel heats up it will begin to expand changing the contact with a projectile. As a result, it is important to consider that third variable external factors may be influencing velocity standard deviations beyond just the rifle and ammunition. Accounting for time series autocorrelations or other factors can aid in interpretation of results.

The primary question is how much does standard deviation matter and what is a good standard deviation? It depends on the distance, caliber, target and tolerance for error. As we saw above, for a flatter shooting cartridge there is less of a difference. The 6.5 Creedmoor’s higher velocity compared to a 308 Win and its flatter trajectory is less perturbed by variations in muzzle velocity. At short distances, such as as few hundred yards, the difference in muzzle velocity is on the order of tenths of an inch. For hunting or plinking a few tenths of an inch may be less critical than for benchrest competition.

When considering the actual standard deviation itself, one way to put the change into context is regarding hit probability. Assuming all other factors such as wind, shooter error, dispersion etc are held constant, if we just consider the standard deviation at long range shooting we can get a feel for how much of a difference a change in sd means to a shooter. For example, a ½ IPSC target is 16” tall. For a 6.5 Creedmoor we would expect nearly all of the projectiles to have a spread of less than 16” for both a standard deviation of 5 and 10 feet/second. In one sense, the change is negligible. However, it can also be argued that more consistency adds margin for error in other factors and will reduce error when considering mean dispersion from shooter group size. With regards to 308, we would expect approximately 96-97% of shots to be within an ½ IPSC at a 10 feet/second sd and nearly all at an sd of 5. In this regard, the difference equates to only a few percent increase in hit probability. For F-Class shooters where a 10” change results in the dropping of an X or a point, lowering the standard deviation may be more critical.